The Church of God GC, was founded by John Winebrenner (1797-1860), in 1825, and may be the oldest Holiness Church.  From its founding it was pacifist, but by WWI it had mostly moved away from that stance.  The Churches of God GC, was pacifist through the Mexican War (1838) and the American Civil War.  After the Civil war, a veteran named Daniel Warner became a Church of God GC minister and later founded the Church of God, Anderson, IN.  To say Winebrenner was deeply influenced by the beliefs of many pacifist groups around him might be over-simple.  We can say that he began as a Reformed minister, required to preach his first sermon in German, surrounded by German pacifist sects, and in time became the publisher of a guide to beliefs of many denominations, a fair number of which were pacifist. 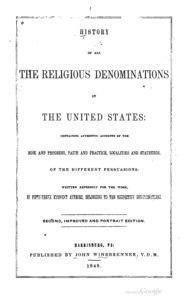 His own group, now called Churches of God General Conference was initially pacifist.

Churches of God in North America [Winebrenner]
From The Faith and Practice of the Church of God, 1829

She [the Church] believes that all civil wars are unholy and sinful, and in which the saints of the Most High ought never to participate. 2 Cor. X. 4. For the weapons of our warfare are not carnal, but mighty through God to the pulling down of throngholds. Heb. Xii. 14. Follow peace with all men, and holiness, without which no man shall see the Lord. Matt. Vii. 12. Therefore all things whatsoever ye would that men should do to you, do ye even so to them: for this is the law and the prophets. Chap, xxvi. 52. Then said Jesus to him, Put up again thy sword into his place: for all they that take the sword, shall perish with the sword. Chap. V. 39. But I say to you, That ye resist not evil: but whosoever shall smite thee on thy right cheek, turn to him the other also. 44 But I say to you. Love your enemies, bless them that curse you, do good to them that hate you, and pray for them
which despitefully use you, and persecute you.

Civil Government
She believes that civil governments are ordained of God for the general good; that Christians ought to be subject to the same in all things, except what is manifestly unscriptural; and that appeals to the law, out of the church, for justice, and the adjustments of civil rights, are not inconsistent with the principles and duties of the Christian religion.

While most members of the Churches of God GC were not pacifist to WWI, some carried forward the earlier tradition.