The Apostolic Faith, Baxter Springs, KS, was founded by Charles Fox Parham, a former Holiness evangelist who had earlier headquartered his work at a healing home and bible college in Topeka, KS, mocked by some locals for its extravagant architectural style.  Like many such fledgling institutions, it was short-lived. 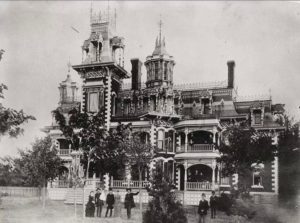 One of Parham’s students was Agnes Ozman, who was reputed to have been the first to receive the evidence of the baptism in the holy spirit, speaking in tongues on new years eve 1901.  During WWI, Agnes Ozman LaBerge was one of ten members of a Pentecostal congregation in Spokane which was sent a letter by the Assemblies of God, inviting congregational membership in that denomination, for the very purpose of gaining recognition as a religious organization officially against sending members to war.  Agnes and three other women were signatories to letters that affirmed congregational membership in that organization, but who chided the Assemblies of God leadership for diluting their statement against warfare with a loyalty oath.  (See Beaman and Pipkin, 2013, p. 19).

In Baxter Springs, a part of the Tri-State mining region, many of his followers would be heavy metal miners, and Pentecostal revivals competed with union organizers for the hearts of workers.  As early as 1906, Parham had been outspoken against military service.  In 1914, he preached a sermon, “War!, War!, War!”

“War! War! War!,” 1914
Recapitulation: War! War! War!—What For? To murder a fellow-creature! To receive therefore even less than thirty pieces of silver, and perhaps live to receive the plaudits and honor of a more cowardly country and imbecile nation; for that nation is imbecile which retains its existence through the struggling exploits of war. We hang our heads in shame to see Christian nations and individuals yield themselves to the embrace of the Moloch-God, Patriotism, whose principle doctrine was honor (?), there to have consumed in the death struggle the feeling of philanthropy and humanity; spending millions to build the fires for the consummation of these virtues, while the cause of Christ languishes, heaven loses, hell opens her jaws, and so-called Christian nations feed (by war) to satisfy her gluttonous appetite
. . .
Yet while thousands of men will volunteer and suffer the hardships and privations of an earthly war for glory, few, indeed, will volunteer and endure the slightest privations for the Master’s kingdom and eternal glory.

Charles Parham’s magazine editor, Francis Romack, was a religious objector in WWI as a member of the Apostolic Faith, Baxter Springs, KS.  Here is his WWI draft registration card.

Note that his reason for requesting exemption from military service was “religious scruples against killing.”  His occupation was assisting in evangelistic meetings for Charles F. Parham.  In point of fact, even though he was a conscientious objector to war, he was drafted and the only concession he was given as a conscientious objector was that he served in the Depot Brigade (transport) and would not have to “bear arms,” although like many COs, he was serving under military orders.  Romack’s sister, Alverda, was married to an Apostolic Faith preacher, Sidney Eugene Waterbury.  Sidney Waterbury, and two Apostolic Faith singers were arrested in Snyder, Texas, in August 1917, on a charge of conspiracy, for speaking against the war in Fluvanna, TX.  After each paid bond of $1,500, the were released to await trial.  Many early Pentecostals were similarly arrested for publicly opposing WWI.