The Apostolic Faith name gained notoriety at Azusa Street in Los Angeles, CA.  There, in 1906-1908, an interracial revival meeting led by an African-American, William Seymour, put Pentecostalism on the world stage.  The days of the Apostles were born again in the American West, some two-thousand years later.  Miracles were claimed to be a nightly occurrence, with healings, prophecies, and a recapitulation of the birth of the church in a Jerusalem with a cacophony of myriad tongues signifying the great diversity of the American empire.  America, that New Jerusalem, that city on a hill, had its own Jerusalem right in Los Angeles.

The temple, the building, was not the wonder.  In fact, the building was quite unassuming and repurposed from much more mundane uses. 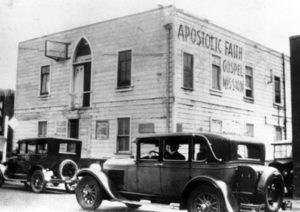 What Azusa Street represented was the building of a large religious subculture of myriad Pentecostal Sect groups, centered on a renewed church where Jesus gave the prophetic spirit to all seekers.  Perhaps hundreds of prophets left their time of pilgrimage on Azusa Street to carry an exuberant message of good tidings of peace to all corners of the world.  Ironically, the home center, was short-lived, as upstarts from there grew and institutionalized, but Azusa lives on in the Pentecostal mythos as the birthplace. 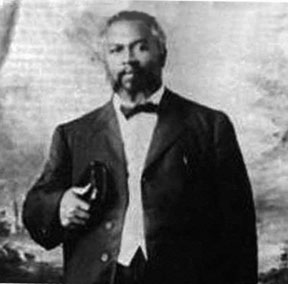 William Seymour also had a fairly explicit set of pacifist beliefs about citizenship and war.

“The New Birth,” 1915
Jesus told him His Kingdom was not of this world. He said, “If My Kingdom was of this world then would My servants fight, that I should not be delivered to the Jews; but now is My Kingdom not from hence.” Pilate asked Him about His Kingdom and kingship, so He confessed He was a King over His people in the Holy Spirit . . .

“The Character of the Church,” 1915
A church constitutes a kind of spiritual kingdom in the world, but not of the world; whose King is Christ; whose law is His word; whose instructions are His ordinances; whose duty is His service; whose reward is His blessing. In all matters of faith and conscience, as well as in all matters of internal order and government, a church is “under law to Christ” (1 Cor. 9:21); but as men and citizens, its members must “submit themselves to governors” (1 Peter 2:14), like other men, so far as shall not interfere with, or contravene, the claims of the divine law and authority upon them. They must “render unto Caesar the things that are Caesar’s, and unto God the things that are God’s,” remembering that God’s claims are supreme, and annihilate all claims that contradict or oppose them (Matt. 12:21).

Since most of what we know of the Apostolic Faith, Los Angeles, is from 1906-1908, about a decade before WWI, most of those influenced towards pacifism were to be found in the large number of pacifists and conscientious objectors in other Pentecostal Sect groups at the time of WWI.  However, we do have some explicit Apostolic Faith, Los Angeles or Azusa Street visitors who were found ten years later as a religious objector to WWI.  In the Apostolic Faith magazine in December, 1906, on the front page was a brief mention of “Pentecost among the Young People.”  One of the youths mentioned there, was Thomas Fred Anderson.  Ten years later he was the appropriate age (28) to be required to fill out a draft card.

In fact, Thomas Anderson, at the time in Whittier, was a Holiness Quaker during WWI, but he had been a full participant in the Azusa Street revival as a young man of 15 years of age in 1906.

Another young man listed in that article was Isaac Berg, who was also later a religious objector to WWI in 1917.  Here is his WWI Draft Registration Card.

Isaac Berg, when asked if and why he was requesting exemption from military service replied, “yes, Pentecostal Church.”  Isaac’s brothers, Peter and William, were also Pentecostal religious objectors to WWI, no doubt also Azusa Street youth from 1906.  This Berg family, were children of Peter Berg, a Mennonite born in Ukraine and immigrant to Kansas who married a Mennonite and then moved to Los Angeles.  Thus, did Mennonites become Pentecostals at Azusa Street in the Apostolic Faith Mission, under the leadership of William Seymour, but they were Pentecostal religious objectors to WWI.

William Henry Berg, a Pentecostalized Mennonite, one of a family who were at the Azusa Street revivals, and who refused military service.  He was initially charged with desertion, and sentenced to 30 years in Alcatraz.  His conscientious objection was deemed insincere.  05 Dec 1918, 6 – The Los Angeles Times at Newspapers

The photo above, summarizes William Berg’s Court Martial from the Army when he refused to serve.  He had been held in military detention at Ft. Leavenworth, KS, and here, almost one year after the end of WWI, after eight months imprisonment after the war, he is being released for time served.  Unlike during his court martial and confinement, he was now judged to be a “sincere conscientious objector,” with “good” behavior in confinement.