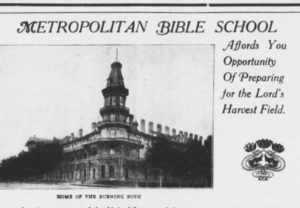 The following news account did not name the MCA, but looking up a draft card of one of the young men in the article shows he was a member of the MCA.Warren

Henry Anaman’s WWI draft registration card was found, and it listed Metropolitan Church Association membership as a reason for exemption from the military draft.

Professor William Kostlevy at Tabor College (Hillsboro, KS) notes that Henry Anaman, was from Ghana, and after Bible School with the MCA, returned as a missionary to Ghana, not as MCA, but as a Pentecostal.