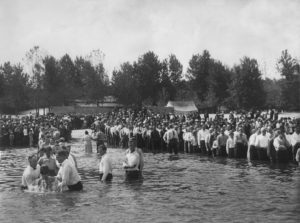 Goin’ Over into Campground

This group, transplanted from the Azusa Street, Los Angeles, Revival, in 1906, was pacifist to WWI in 1917.  The photograph shows a baptismal scene after WWI, but we have baptismal records from the Apostolic Faith church in Portland, Oregon.

During World War One, The Apostolic Faith, Portland, OR, was pacifist to war.

Here is the text from the Apostolic Faith’s doctrinal statement on page two of their magazine in June 1917 at time to register for the draft.

War–it is our firm conviction, supported by the Word of God, our conscience bearing us witness, that we cannot take up arms against our fellow men, however great may seem the provocation or however just the cause might seem: it being the teaching of the Spirit of the Gospel presented by Christ in his sermon on the mount.  Matt. 5:39-46.

We maintain the highest regard for our flag and teach absolute respect for the laws and officials of our country.  Rom. 13:1-7 and II Peter 2:13-14, as long as it does not violate our conscience.  “For we ought to obey God rather than man.”  Matt. 5:29.  And we hold the unalienable right to worship God according to the dictates of our conscience.

The baptismal photograph above shows a river baptismal service held in public in a river in Portland, Oregon.  This is what the Apostolic Faith regularly featured as the “old time religion,” when they advertised their camp meetings.  Still, they typed up a modern baptismal record in each case and kept it in a card catalog.  I checked a number of baptismal records of men born between 1887 and 1895, the birth cohort of age for draft registration on June 5, 1917, and most draft registration cards I found requested conscientious objector status on line 12.  Would these baptised members of the Apostolic Faith join the military in WWI?  In fact, most of them, chose to request exemption on line 12 of their draft card as a conscientious objector.  In order to do so, they had to be a member of a recognized religious sect which was on record against members going to war.  Their doctrinal statement above provided such a record.  Their draft registration above their signature, requested exemption as “religious”, or “religiously opposed to war,” or just “member of Apostolic Faith.” 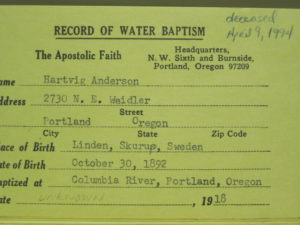 Note how Hartvig Anderson requests exemption from military service on line 12: “Religiously opposed to war,” in the draft card link above. 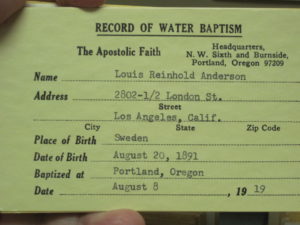 Note how Louis Reinhold Anderson requests exemption from military service on line 12: “Religious,” in the draft card link above. 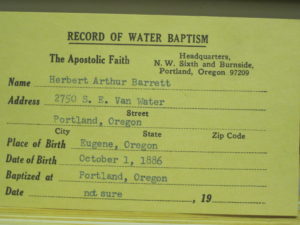